My name is Kristy Yenick, I am an embryologist here at NCRM I’m also an andrologist but we’re one in the same so we do both things. So this is the egg retrieval room this is an operating room and this is where if we’re doing an IVF procedure patients going to come in and the provider doctor is going to aspirate follicles. Follicles contain eggs, blood, fluid, cell debris, so that is when Dr. Whitten or Dr. Foulk is going to pass the the tube to me and embryology or Patty or Giri one of the embryologist in this door over here actually opens up into the embryology lab this is where we’ll start to look for eggs and these eggs that were looking for on the follicular fluid that’s no bigger than a grain of salt really it’s pretty hard to see with the naked eye is either going to be a mature egg or an immature egg so we can actually only inseminate mature eggs. That is when we are going to assess and pull out the eggs and then put it through a series of different washes to make sure it’s still viable and it’s an okay egg and then later we’re going to take sperm put the sperm through a series of different preparations and washes in laboratory to make it super sperm. And that’s when we’re going to take that sperm and either do and then do the IVF, do the IVF everybody knows and talks about and we’re going to eat or do you want to do things when do conventional IVF that everybody pretty much learned about where you takes sperm and egg in a petri dish and let it all kind of mixed together or we’re going to do a procedure called IXIE inter inter cytoplasmic sperm injection. So that’s where we’re going to take a sperm and an egg and we’re going to actually join them together under the microscope ensuring that fertilization is actually occurring and then we’ll put back in the incubator. The incubator actually in here is where the embryos are housed and it is CO2 regulated pH oxygenated as well as temperature regulated so it’s very optimal house for the embryo that is where we keep the embryos in until we pull them out and I need to do a series of checks. So after 16 to 18 hours we are going to take the embryos out and see if fertilization occurred. How we distinguish fertilization is if we see an embryo and has two pro-nuclei that means cell divisions actually occurring fertilization did occur here will put them back in the incubator and then we’ll come back on day 3 and will start to look at embryos and see if they are there kind of a critical time point in the laboratory and we are going to make or break it at this stage not 100% one way or the other way but we’re going to give them a grade. The embryologist is going to grade the embryos on their cell division if there’s 4 cell, 8 cell, and also kind of their fragmentation. Do the cells match each other or they are they a asymmetrical or symmetrical and so we’re going to understand that what division of mitosis and meiosis the cell itself is actually at. And this hopefully will give rise to a blastocyst. The blastocyst is what we want to get to on day 5. Blastocyst will give rise to an embryo that will hopefully attach to the uterine wall make a baby as we all know and hope for it today. The blastocyst has an outside mass which is called a trophectoderm which gives rise to the placenta and an inner cell mass which actually gives rise to the baby our hope is that the blastocyst on day 5 will either be biopsied by a test called on pre genetic screening or biopsy will take a piece of the trophectoderm or the outside send it off to another laboratory and that laboratory will come back and say yes that embryo is euploid embryo or aneuploid embryo meaning chromosomally normal or abnormal this benefit is to make sure that when we take that embryo and put it back into mom-to-be that that’s a euploid chromosomally normal embryo that’s what we all want and that will hopefully give rise to baby. We could also go and freeze all the embryos and laboratory and come back and do a frozen embryo transfer allow the body to reset and a new protocol will be formed after that to kind of make sure that the uterine lining is an optimal environment to hopefully allow the embryo to adhere and and grow and develop or we will do a fresh embryo transfer. So those are one of the three different things that we do after a blastocyst is formed after IVF and its entirety that takes place in the egg retrieval room here this is also the frozen embryo transfer room so this is where the doctor and the laboratory really connect and talk and this is where the magic happens so that is IVF. Thank you for everyone that came to the Fertility Fair, it was a really amazing event, thanks for learning about what we do in the laboratory and throughout the office and if anyone has any questions there’s a lot that was covered please feel free to call our office at 775-828-1200 we have a really knowledgeable staff that wants to help you reach your goal so thank you for being with us tonight we had a great time and hopefully we’ll do it again next year, give us a call. 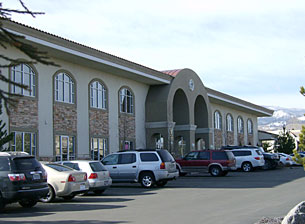 I am so thankful for all of your kindness and efforts to help us finally become parents.  You all w… END_OF_DOCUMENT_TOKEN_TO_BE_REPLACED

I can not begin to imagine my life without the two children Dr. Foulk and his team were able to help… END_OF_DOCUMENT_TOKEN_TO_BE_REPLACED

Can not say enough about how amazing the entire staff is. They never gave up on us, always had hope … END_OF_DOCUMENT_TOKEN_TO_BE_REPLACED

We cannot thank you enough for your support during our months of going to your office. It was an ama… END_OF_DOCUMENT_TOKEN_TO_BE_REPLACED

We went to two different repro docs in California and then we saw Dr.Foulk and he looked at the file… END_OF_DOCUMENT_TOKEN_TO_BE_REPLACED

We wanted to write and say thank you for your help in making our new family possible.  But thanks j… END_OF_DOCUMENT_TOKEN_TO_BE_REPLACED

I wanted to express my thanks for the wonderful care you gave me while “K” and I prepared for IVF. … END_OF_DOCUMENT_TOKEN_TO_BE_REPLACED

The COVID-19 virus may affect your treatment cycle. Please call the office with questions. Office hours will be reduced during this time.